We conduct research into the early development of attention, learning and memory abilities during infancy.

Research is increasingly suggesting that the early years are critical in laying down the basic ‘tools for learning’ that are required for subsequent learning in areas such as language learning and learning in academic settings.

And when something unusual happens during development (such as for a child in the early stages of developing a clinical disorder), research suggests that in many conditions, atypicalities tend to emerge early – i.e. to be detectable even during infancy – and then to get progressively more severe over developmental time.

We have developed and published research using new paradigms – the first of their kind in the world – that attempt to strengthen key learning skills during infancy. We conduct research with typically developing infants that uses these paradigms to investigate how attention and learning interact during these critical early stages of development. And, in collaborations between the CALM and other research groups, we use the same training techniques to see if it is possible to alter early developmental trajectories in infants who are at higher than normal risk of going on to develop atypically – such as infants with early behavioural abnormalities and infants with relatives who have clinical conditions.

More information and what we have found so far:

More information on this work is available here. 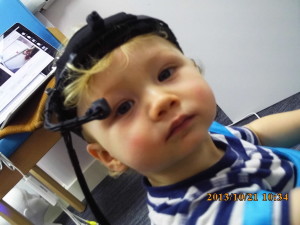 Understanding the early development of intelligence in babies

The question ‘What is intelligence?’ is one of the central themes that has dominated research here at the Cognition and Brain Sciences Unit since it was first founded in 1944. In the work of Professor John Duncan, who joined the unit in 1976, this question has been examined from many different angles, from the study of healthy adults in the scanner to testing patients with brain damage. Much of this work is described in his recent popular science book ‘How Intelligence Happens’.

To answer these questions we are starting to look right at the beginning of life – with babies, aged 6-24 months of age. Professor Duncan has teamed up with Dr Sam Wass, who has experience developing new techniques to assess and train cognitive functions with babies. Their project will assess whether differences in intelligence are detectable even in the very early years of life – and if so, whether anything can be done to train it. Research from other areas is suggesting that the early years of development are vital in laying down the foundations on which all aspects of later learning are based – suggesting that it is important to try to find answers to these questions.”

How to take part

We are actively recruiting typically developing baby volunteers to take part in our studies. If  you have a child aged 0-18 months we would love to hear from you, please click here to find out more information and to volunteer.

Please note, the infant and baby research programme is separate from the CALM clinic. If you are a parent and your child has a learning difficulty and a specialist or practitioner has suggested your child should attend CALM, please click here to find out more.