At the CALM we conduct research into the early development of attention, learning and memory abilities during infancy.

Research is increasingly suggesting that the early years are critical in laying down the basic ‘tools for learning’ that are required for subsequent learning in areas such as language learning and learning in academic settings.

And when something unusual happens during development (such as for a child in the early stages of developing a clinical disorder), research suggests that atypicalities tend to emerge early – i.e. to be detectable even during infancy – and then to get progressively more severe over developmental time.

At the CALM we have developed new paradigms – in the first of their kind in the world – that attempt to strengthen key learning skills during infancy. We conduct research with typically developing infants that uses these paradigms to investigate how attention and learning interact during these critical early stages of development. And, in collaborations between the CALM and other research groups, we use the same training techniques to see if it is possible to alter early developmental trajectories in infants who are at higher than normal risk of going on to develop atypically – such as infants with early behavioural abnormalities and infants with relatives who have clinical conditions.

More information on this work is available here.

We are actively recruiting typically developing baby volunteers to take part in our studies. If  you have a child aged 0-18 months we would love to hear from you, please click here to find out more information and to volunteer. 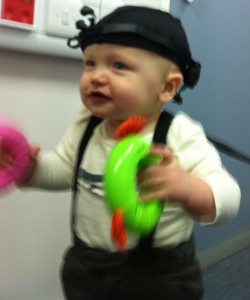